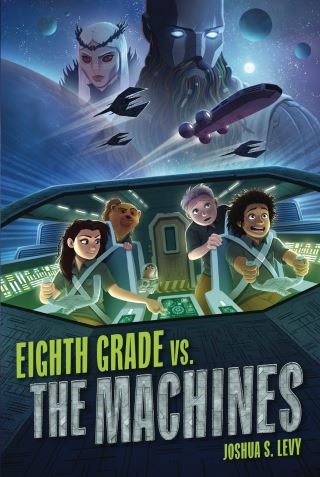 Eighth Grade vs. the Machines

After the entire population of Earth's solar system is whisked away by alien technology, Jack and his classmates and teachers aboard the PSS 118 are the only humans left. It's up to them to find and rescue the rest of humanity—if they can avoid the aliens hunting them down, steer clear of a robot civil war, and figure out who among them might be a traitor.

"Hilarious, high-stakes, un-put-downable fun."—Jarrett Lerner, author of the EngiNerds series "Another amazing trip across the galaxy with the students of PSS 118!"— Monica Tesler, author of the Bounders series

Joshua S. Levy: Joshua S. Levy was born and raised in Florida. After teaching middle school (yes, including seventh and eighth grade) for a little while, Josh went to law school. He lives with his wife and children in New Jersey, where he practices as a lawyer. Unfortunately, outer space doesn't come up in court nearly as often as he'd like.