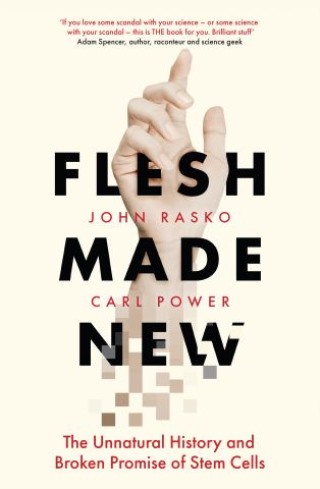 The Unnatural History and Broken Promise of Stem Cells

The dazzling promise of stem-cell medicine: does it work and will it save us? Two experts look at the hype

For decades, we've been anticipating the dawn of regenerative medicine. Again and again, we've been promised that stem cells will soon cure just about every ill imaginable. If not tomorrow, then the next day, or the day after that, and so on. We're still waiting.

This book is an antidote to hype and a salve to soothe the itch for stem-cell salvation. In it, Professor John Rasko, a leading physician-scientist, and writer-historian Carl Power take us on a wild historical tour of this scandal-prone field. They expose all the dirty little secrets that the hype merchants prefer to ignore - the blunders and setbacks, confusions and delusions, tricks and lies. You'll meet Alexis Carrel, who discovered how to cultivate cells in a test tube: celebrity surgeon, scientific genius and suspected Nazi sympathiser, he opened the field of modern cell science with an experiment so bogus it blocked the way forward for the next 50 years. You'll meet Don Thomas, who developed bone marrow transplantation - the first successful stem-cell therapy - but only after a miserable decade in which most of his patients died. Alongside true stem-cell pioneers, you'll meet charlatans who cooked their data and claimed fake cures - sometimes with fatal consequences.

Is there any good news? Which of the many promises of stem-cell research have been kept? And what of the future? Rasko and Power insist that we can only know where we're going if we have a sense of where we've been. Their study tears down the hype surrounding stem cells in order to reveal what's still worth hoping for.

'If you love some scandal with your science - or some science with your scandal - this is THE book for you. Brilliant stuff' Adam Spencer, University of Sydney

'Science, skulduggery and snake oil salesmen ... it is a revolution in medicine but who knew the story of stem cell science was such a ripping yarn!' Fran Kelly, ABC Radio National Breakfast

'Science isn't magic: it's a human enterprise. This enthralling book tells of high achievement and astonishing blunders in a vital field of research' Robyn Williams, science journalist and broadcaster

'A masterpiece in myth-busting which helps separate fact from fiction in the world of regenerative medicine. It shines a light on some episodes in medical history many would rather forget but also shows a way forward for stem cell research breakthroughs grounded in solid science' Sophie Scott, national medical reporter, ABC

'A compelling (and compulsory) read for anyone entranced by the latest media-promoted breakthroughs in medical research, or planning translation of new biomedical research into clinical practice' Ian Frazer, AC, FRCPE, FRCPA, FAA, FTSE Australian of the Year 2006, Australian Living Treasure 2012

'Is it really stem cells' turn to revolutionise health care? When you come across a train wreck, keep reading! You'll discover that stem cells reveal medicine in its most provocative and challenging light' Antony Basten AO FAA FTSE

'Flesh Made New is a revelation for the general reader about what lies beneath the surface of exciting scientific advances ... The book shows the value of patience and trust in robust evidence-based scientific research, and where things go off the rail, for whistleblowers and experts like the authors of this book' Lucy Turnbull AO, businesswoman, urbanist and philanthropist

John Rasko AO is an internationally-acclaimed leader in gene and stem cell therapies. He heads both the Gene and Stem Cell Therapy Program at the Centenary Institute, and Cell & Molecular Therapies at Royal Prince Alfred hospital in Sydney. He frequently appears on radio and television programs to talk about stem cell research, medical tourism, scientific fraud and related matters. John delivered the 2018 Boyer Lecture series for the ABC.

|||Carl Power is a writer in the history of philosophy and medicine. An eternal student and sometimes lecturer, he has explored the concept of life throughout the ages, from the earliest creation myths to the latest fantasies of the post-human future.