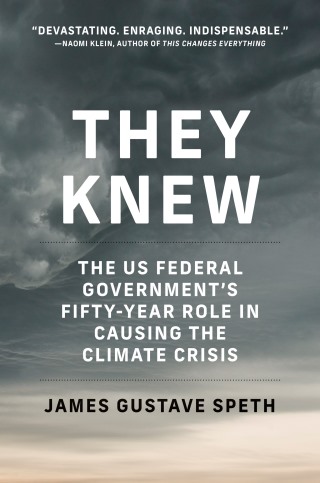 A devastating, play-by-play account of the federal government's leading role in bringing about today's climate crisis.

In 2015, a group of twenty-one young people sued the federal government for violating their constitutional rights by promoting the climate catastrophe, depriving them of life, liberty, and property without due process of law. They Knew offers evidence for their claims, presenting a devastating, play-by-play account of the federal government's role in bringing about today's climate crisis. James Speth, tapped by the plaintiffs as an expert on climate, documents how administrations from Carter to Trump--despite having information about climate change and the connection to fossil fuels--continued aggressive support of a fossil fuel based energy system.

Since Juliana v. United States was filed, the federal government has repeatedly delayed the case. Yet even in legal limbo, it has helped inspire a generation of youthful climate activists.

An Our Children’s Trust Book

James Gustave Speth: James Gustave Speth served as member and chairman of the U.S. Council on Environmental Quality during the Carter Administration and from 1993 to 1999 was Administrator of the United Nations Development Programme and served as chair of the UN Development Group. A retired Professor of Law and Senior Fellow at the Vermont Law School, he has also taught at Georgetown and Yale. He is the founder of World Resources Institute and a cofounder of Natural Resources Defense Council.