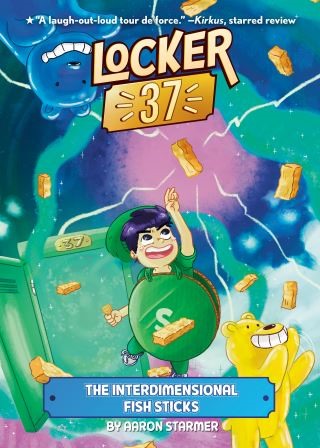 Hidden away at Hopewell Elementary School is a magical locker that always delivers a solution to your problems--just not quite in the way you might expect. This highly illustrated series is a fun and accessible read, perfect for reluctant readers looking for a little magic!

In the fourth book in the Locker 37 series, it's Halloween at Hopewell Elementary, but when fourth-grader Bryce Dodd shows up in a costume, he's told it's too distracting. All Bryce wants to do is express himself (and maybe also to impress Keisha James...), and luckily, the magical Locker 37 has a solution to Bryce's costume conundrum - interdimensional fish sticks! Each time he eats one, he's transported to a different parallel universe, and each time he travels to a new one, things get weird, weirder, to off-the-walls weird. Will Bryce be able to make it back to his home dimension and Keisha, or will he be stuck in an alternate universe forever?

Aaron Starmer: Aaron Starmer was born in northern California and raised in the suburbs of Syracuse, New York. Before pursuing writing full-time, he worked in New York City for over ten years as an editor for a travel bookseller and as an operations director for an African safari company. His middle grade and young adult novels have been translated into multiple languages and have appeared on best of the year lists from Time magazine, the Wall Street Journal, New York Public Library, YALSA, Bank Street College of Education, Chicago Public Library, and School Library Journal. His latest novel, Spontaneous, is in development as a film. He lives in Vermont with his wife and two daughters.

Courtney La Forest is an illustrator and designer currently residing in Los Angeles, California. They love empanadas, trying out new activities like dance aerobics and bouldering gyms, and hanging out with cute dogs.