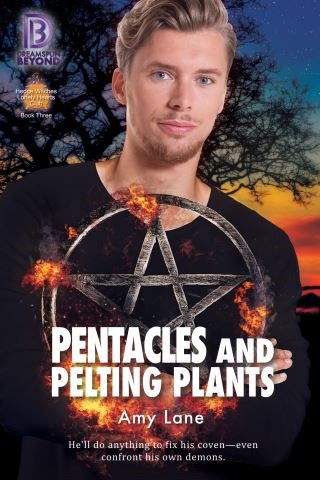 A month ago, Jordan Bryne and his coven of hedge witches cast a spell that went hideously wrong and captured two of their number in a pocket of space and time. The magic is beyond their capabilities to unravel so, in desperation, they send up a beacon for supernatural aid.

They don’t mean to yank someone to their doorstep from hundreds of miles away.

Once Macklin Quintero gets past his irritation, he accepts the challenge. The tiny coven in the Sierra foothills is a group of the sweetest people he’s ever met, and he’s worried—the forces they’ve awakened won’t go back in their bottle without a fight.

But he also wants to get closer to Jordan. Mack’s been playing the field for years, but he’s never before encountered somebody so intense and dedicated.

Jordan might quietly yearn for love, but right now he’s got other priorities. The magic in the cul-de-sac doesn't care about Jordan’s priorities, though. Apparently the only way for the hedge witches to fix what they broke is to confront their hearts’ desires head-on.